The market’s relentless march upward has continued into the new year. Despite difficult economic circumstances, stocks continue to be in demand. At present, the technical action in the stock market continues to be bullish, with most of the major indices around or near their all-time highs.

We saw the first meaningful pullback since October at the tail end of January, but it was shallow and short-lived. Most of the indices only backed off around 4%, completely recouping that drop during the first week of February.

The press played up the GameStop (GME) short selling as the reason for the selling. However, as we pointed out in our recent note, (click here to read) the monetary impact from it is simply too small for it to be material for our $50 trillion stock market.

While the market has gotten expensive in terms of P/E ratios, it has always had pleasant surprises from corporate earnings. Earnings for Q4 of 2020 are now expected to come in around a positive 2%. At year-end, predictions were for that number to be a negative 10%, so while a small growth number, it represents a substantial expectations beat.

The stock market’s incredible V-shaped recovery since the March 2020 lows can largely be attributed to the Fed’s actions during the pandemic. They have purchased $3 trillion dollars in assets since March of last year and are continuing to buy $120 billion in bonds each month. 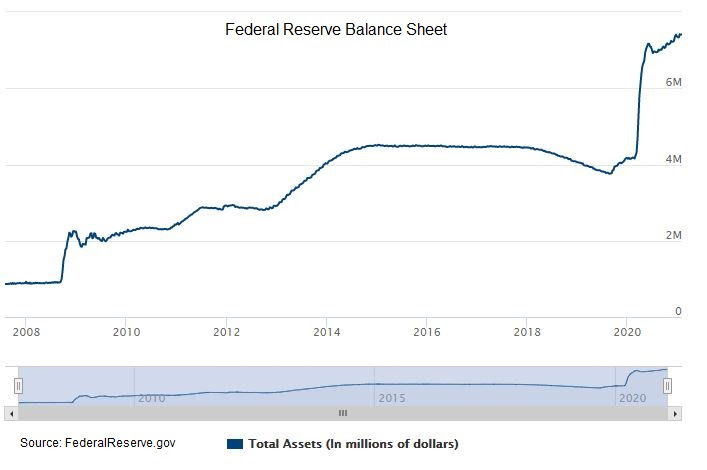 In the recent Fed meeting on January 26-27, Jerome Powell reiterated that monetary policy will continue to be very stimulative for the foreseeable future, with no plans of tightening on the horizon.

“When the time comes to raise interest rates, we’ll certainly do that,” he said. “And that time, by the way, is no time soon.”

Coupled with the record fiscal stimulus, the conditions certainly exist for this to keep going. Former Fed chair Janet Yellen also called for “big” action during her Senate confirmation for Treasury Secretary. She was sworn in as the 78th Secretary of the Treasury on Jan. 26.

With Yellen leading the Treasury, the assumption is that the Fed and the Treasury will certainly be working closely together due to their ties back at the Fed.

Yellen has certainly been outspoken about greater government spending to counteract the pandemic. “Neither the President-elect, nor I, propose this relief package without an appreciation for the country’s debt burden,” Yellen said. “But right now, with interest rates at historic lows, the smartest thing we can do is act big. In the long run, I believe the benefits will far outweigh the costs, especially if we care about helping people who have been struggling for a very long time.”

The outlook is for continued stimulative actions from both the Fed and the Treasury. That should continue to give asset markets the liquidity needed to go farther and last longer than one would normally assume. For now, the action is clearly positive and we will continue to participate.

As always, we will be keeping a close eye on our indicators and remain prepared to change our stance when the time comes.

Our steps to be nearly fully invested have so far paid off. Interestingly, the big winners so far this year have come from ETF holdings: SKYY (cloud computing), +13%; IBB (biotech), +12%; and FDN (internet), +11%. We also saw great months from FLIR Systems (FLIR) and Alphabet (GOOGL). Only small adjustments as we ride the positive start to the new year.

January marked continued strength in the stock market, favorable to nearly all sectors. Only the more defensive Consumer Staples were down since the start of the year. Last year’s laggard, Energy, has been the best of 2021 so far with an early surge.

Our holdings remain rather broad, with weightings in all sectors, except Utilities, Real Estate, and Consumer Staples. The general stock market has been reaping the benefits of surging markets, especially in Small Caps, which have jumped nearly 12% to ring in 2021. We have a green light in all categories, including Growth and Value, as well as Small Cap holdings.

The green light is on for Internationals as well, both for Emerging Markets and Europe. Though lagging the U.S., Europe is positive for the year. Emerging Markets have been strong, up around 9% to start 2021.

January got off to a fast start in the portfolio with the momentum theme-based trades continuing to chug along. We took some risk off the table by realizing solid gains via the bitcoin trust ETF (GBTC), and gained exposure in the recovery trade via the shippers such as Navios Maritime and Star Bulk container, (NMM, NMCI, and SBLK). The market remains strong overall, but is also showing some internal rotation underneath the hood. The tug of war rotation between stay at home stocks versus the recovery/reflation trade is continuing and we will be tinkering with our exposure in both of these areas to maintain a solid risk-adjusted balance in the portfolio.

No changes in these holdings as most stocks are participating in the rally. Some past winners are pausing to catch their breath, such as MasterCard (MA) and Visa (V). Otherwise, we saw solid strength across all sectors. Applied Materials (AMAT) showed strength, as did Walgreens Boots Alliance (WGA), and People’s United Financial (PBCT). No significant changes expected at this time.

Dividend stocks have not been left out of the market rally. We saw good jumps from stocks like KeyCorp (KEY), Seagate (STX), Newell Brands (NWL), and JPMorgan Chase (JPM). Yields of Treasuries have been rising, which can sometimes hurt this group. However, that has not happened yet as many of the dividend stocks continue to perform.

We would be happy to help you with a complimentary financial review. Please feel free to contact us at (877) 937-7110 or info@churchillmanagement.comor click here.

** This report is meant to inform the reader of our current market opinion, which we, as professional money managers, use in our decision making. It should be noted that stock market and bond market data are subject to varying interpretations and any one interpretation will not necessarily guarantee investment success. The information obtained from the sources specified herein and used as basis for our current market opinion is believed reliable, but we do not guarantee the accuracy of such information.